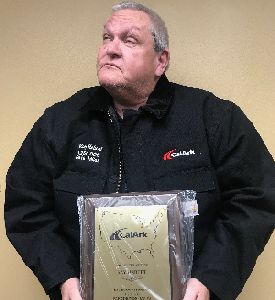 We are proud to announce Ray Hebert has reached his 1.25 Million Mile Milestone with CalArk, but he will be quick to add that he has over 3 million career miles. Ray has also been in trucking for 45 years, starting out when he was only 14 with his cousin and Uncle Pete. Ray's step dad also ran flatbeds and dump trucks, so you could say Ray was born and raised in trucking. Ray was also born and raised in Canada, and there you could get your Class B License at just 16 years old. By the age of 18, Ray also had his chauffeur's license and was running end dumps.

Prior to trucking, Ray had an avid love for hockey, playing until he was 20 years old for the Toronto Spitfires, the farm team for the Toronto Maple Leafs. He played goalie for three seasons and had the most minutes in the penalties box. He's also played the drums since age 10 and, after starting to play in pars at 14, he was in a country band until 23 years old, when his daughter Amanda was born.

Ray and his family later lived in Michigan and California before settling in his current home of Huntsville, Texas. His daughter became a Texas State Law Enforcement Officer after getting her bachelor's degree in Criminal Justice at just 21 years old. He says she never gave him "an ounce of trouble," and that he only spanked her once because she's hurt more to think of disappointing him. "She's a daddy's girl and my fishing buddy," he says. Her high school friend, Nick, has been part of the family since reconnecting through Facebook a few years ago.

Ray has been with CalArk off and on since 2002. He's done everything in trucking but cars and cattle, including hauling music equipment with Show Quip Entertainment for the likes of George Strait, Tim McGraw, Kenny Chesney, Leann Womack, Martina McBride, and Travis Tritt. That job came with perks like all-access show passes and sharing meals with them. He says he once "got into it" with a lady whose child tripped over his leg while "running crazy" in the backstage food area, only to learn later he'd been in a tiff with Martina McBride without her makeup.

He's worked in many areas of trucking over the years but says CalArk is his favorite, and the whole family from Safety to Operations are his "old friends" and that we treat him well. Deronda Wofford, Director of Operations, says Ray "will make anything impossible happen." When we'd just bought our reefer trailers and the first one out broke down with a load of turkeys, she says he saved the day and the load. "He is always willing to do what he can to get the freight delivered."

Ray, we're so happy you've chosen CalArk, and we look forward to many more milestones with you. Thank you for keeping the wheels of American business rolling!