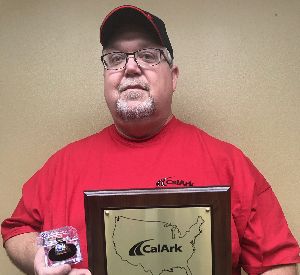 Brian "Todd" Thompson recently stopped by the Safety Office to pick up his 1 Million Mile ring,  jacket, and plaque. Todd has been with CalArk since February of 2011 and is on Michelle Finn’s board. He is from Mead, Oklahoma, the state where he's lived his whole life except for a brief stint in California when he was in his early twenties.

When Todd graduated high school he says he just "messed around for a few years." He found himself in California working at a gas station at 20 years old until a piano moving company came through and offered him a job. He also worked at an antique furniture store while in California. After several years, though, Todd returned to Oklahoma and worked odd jobs. It was in 1993 when he started his first trucking job. He worked for Old Milwaukee and said somehow he passed the driving test although he didn’t know what he was doing and ground the gears all the way through.

Since then, Todd has worked for other trucking companies like Werner, FedEx Ground, Musgrave Trucking, and Stan Koch & Sons before coming to CalArk. Todd comes from a family of drivers. His grandpa was a box truck driver and his uncle delivered eggs. He would ride with them in the summertime, waking up at 3 AM to run their routes.

Todd says he learned how to drive a truck over the CB Radio. Other drivers would tell him how to do things like drive through mountains by saying things like, "follow me, and when I brake you brake." Todd laughs when he says this and adds, "I smoked a lot of trailer brakes in the beginning!"

Todd also recalls not knowing how to keep a log book. He said he made the mistake of listening to some other drivers and never really knew how to "properly" keep a log book until he met a certain DOT officer at roadside in 1995.  He had never been inspected before, and the officer quickly caught on to the fact that Todd didn’t understand log books. Right there on the side of I75 in Bartlesville, Oklahoma, that officer helped Todd learn how to properly log his hours of service.

Todd also tells about the days where there were no cell phones to carry with you. Drivers would have to find a stop that had a pay phone available, and he would often have to wait in line to use the phone. Sometimes he would wait for an hour or more to call in to dispatch just to hear there was no load available and he would have to call back. Shaking his head, Todd says, "technology helps us a lot nowadays."

Todd says his favorite load ever was pianos, which he loved moving. He also likes dry van, for the in and out with no loading. He likes trucking in general because it fits his personality. Todd is quiet and likes to keep to himself most of the time. He doesn’t have a lot of friends; he says it’s a quality versus quantity issue. He is very connected with his family. Todd never had kids of his own but he helps with his nieces and nephews.

When Todd is not driving, he likes to watch the Sooners play. He also likes the Dallas Cowboys and he recently started following the Browns since former Sooner Baker Mayfield won the Heisman last year. He also likes to ride his Yamaha Viking Side by Side or go out on the lake in his boat during the Summer.

Other awards Todd has received at CalArk include 100, 000 to 900,000 mile awards, 100% On Time Delivery each year, and his 5 years of Service Award. Todd also recently moved into his brand new 2019 International. Todd likes CalArk because, "it just works out." He has never been with any other company for more than 3 years. When asked what advice he would share with new drivers to CalArk or new drivers to the industry he says, "Pull yourself back and don’t get stressed. Slow down. I’ve learned that I can slow down and do things right and cover the same distance. Just calm down and take your time."

Thank you, Todd, for your commitment to Safety, to CalArk, and to the trucking industry. We are proud to have you on our team driving the Wheels of American Business. Congratulations on 1 Million Miles!