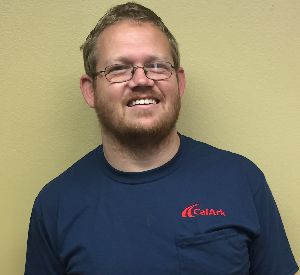 We would like to congratulate Thomas Christmas on his recent achievement of 1.2 Million Miles of safe driving. Thomas started his career in trucking in September of 2006 before coming to CalArk in July of 2009. He is from Belton, Texas and is on Michelle Finn's board. Thomas says being a driver was in the cards for him as his mother, father, two sisters, brother, and cousins have all been truck drivers as well. Before driving, he worked in fast food and retail.

He likes driving a truck because it gives him freedom and he is not micromanaged. He likes CalArk because of the nice equipment and the friendly people. He says "everybody knows everybody" and there aren’t many companies where you can walk in and talk to the owner or to the director of safety. Thomas's dispatcher, Michelle, says Thomas is a true team player and she enjoys managing him.

His CB handle is Santa Claus and was given to him by his father because of their last name. When he isn't driving he likes to fish, hunt, and do anything outdoors. He also enjoys spending time with his friends and family. Thomas has been a representative for CalArk at the Arkansas Truck Driving Championship in the past and has expressed interest in attending again in the coming year.

Among other awards and recognition, he has received 100,000 miles to 900,000 mile awards, 100% On Time Delivery each year, Company Driver of the Year 2nd Runner Up in 2012, 5-Year Service Plaque, and 1 Million Miles of Safe Driving. When asked what he would say to his fellow drivers about what has made him successful, Thomas says, "remember things won’t always go your way and you need to be a team player."

Thank you, Thomas, for being a team player here at CalArk and for all you do to keep the wheels of American business turning!​