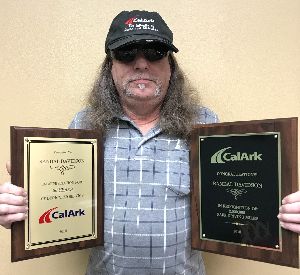 CalArk driver Randal Davidson of Grovetown Georgia, reached two impressive milestones this year. He has logged over 2.5 Million Miles with CalArk and has been moving the Wheels of American Business for 20 years.

Before CalArk, Randal worked in millwork as a supervisor and as a mechanic, and worked in creative machinery and thread design. When he is not driving, he likes to go home and work on his 1974 yellow AMC Javelin. If you have ever seen a Javelin, you know it has certain features that makes it look like a Camaro, a Mustang, a Barracuda, and a Corvette. That’s one reason Randal fell in love with the car. Since he is over the road so much, his Javelin is a 5-year project so far. In addition to working on his Javelin, Randal is also a talented musician who plays the guitar and sings.

Randal is on Ronnie Moore’s board, and Ronnie says, "Randal is always willing to help out when a driver needs to get home or we have a hot load that needs to deliver. He’s very knowledgeable of his job and plans his days well in advance." Tommy Kilburn, Safety, tells us, "Randal is just a really good guy."

We’d like to thank you, Randal, for choosing to spend the last 20 years with us. We are very proud of your accomplishments and we look forward to many more with you.