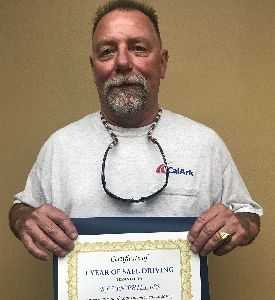 We are always proud of our drivers’ accomplishments, such as warehouse driver Kevin Phillips reaching his 1 Year of Safe Driving Milestone.

However, we are proud of Kevin for going above and beyond to ensure the safety of the motoring public around him. On May 22, 2019, Kevin was traveling in Palestine, Arkansas, after making his first delivery for the day in Pine Bluff. He was on his way to his second stop in El Dorado, Arkansas. It was raining heavily and much of the area was under a flash flood warning. He was on 79 South when he entered a sharp curve.

Another vehicle in front of him had just left the curve when the young female driver inside lost control of her vehicle, which began to slide and fish tail in front of Kevin. Kevin had to make a quick emergency maneuver to avoid the smaller car. He missed her, but she kept sliding until she hit a culvert and her car rolled four times before coming to a stop in a ditch.

Luckily the young driver was wearing her seat belt and was getting out of her vehicle when Kevin stopped to help. Visibly shaken, in shock, and wet from the pouring rain, she ran frantically to him. After 911 was called, Kevin let the young girl use his cell phone to make personal calls to her family and employer. He stayed with her and kept her calm and safe until emergency services arrived. When she was placed on an ambulance gurney, Kevin made sure she had her purse and everything she would need once she arrived at the hospital.

CalArk has been unsuccessful in attempts to follow up on the young girl to see how she is doing, but we can be certain she was blessed that our driver was there for her. CalArk will be nominating Kevin for the Truckload Carrier Association’s Highway Angel Award.

Good job, Kevin! We are proud you are a part of the CalArk family.