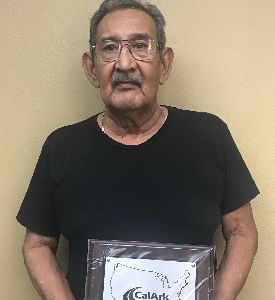 José Frausto has been with CalArk since January 2011 but has been driving big trucks since he was 15 years old. It all started at the age of 10 when he helped his godfather with a milk route making $1.00-$1.50 a day. When his godfather retired, José continued working for the dairy company and at 15 got his license to drive. José drove until graduation high school, then went into the Navy. After 22 years of the military, José retired and returned to driving. He drove for various companies prior to finding a home with CalArk. Jose says he likes trucking because no one nags him, and he likes CalArk because we've has been good to him, his dispatchers provide consistent miles to drive, and his fellow drivers are nice.

When José is not driving, he spends time between his home sin Eagle Pass, Texas, and Mexico. He says he was “hatched” and raised in EaglePass. He has been married to Martha for six years. Between the two of them they have five grown children and many grandchildren. José once enjoyed wood carving as a hobby but says these days he mostly likes to spend his free time with his family. He enjoys eating but steers away from “truck stop” food if he can help it. He likes to listen to Mexican music, but usually has his station tuned in to the Rush Limbaugh Show.

He received a new Kenworth in December 2018, which he christened with holy water he keeps in his truck. He also keeps the Truck Driver’s Prayer displayed in his truck and recites it daily. When asked what advice he would give to his fellow professional drivers, Jose says to just “be safe”. He also adds to “make time to make friends and always be helpful." The day José came in to do his Driver Spotlight, he had just come back from a trip to pick up another driver who had broken down. Leslie Stout, CalArk Safety Director says, “That is José, he is always willing to help if he can. He is a very reliable and trustworthy driver.”

Thank you, José, for your service to our country, to our industry, and to CalArk International. We look forward to many more years of keeping the Wheels of American Business rolling with you in our family!