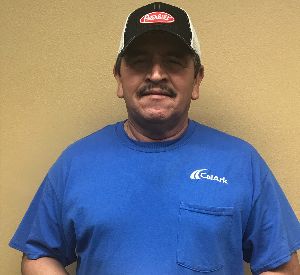 It is bittersweet to be typing these words, but after 10 years and 1.2 Million Miles of Safe driving Jesse Alegría is taking some time off from trucking. He will be greatly missed while he is away, but he promises he is coming back to us at CalArk. It is a commendable reason to take time off; Jesse said his wife of 32 years (as of December 19, 2018), Rosalba, has been patient with him being over the road. With just 2 and 3 days home here and there, Jesse says he owes Rosalba more.

So, he is quitting (for now) and the plan is to spend time with his wife and family and take a trip to either Italy or Hawaii. Jesse is obviously a family man. He has two children, Veronica and Jesse Jr. Jesse lives in San Antonio, Texas, but grew up in Ohio where he says he originally learned to drive with his dad. He has been driving a truck since the age of 16 because in Ohio if you stay on rural roads it was considered driving a "farm truck." Jesse credits his dad with teaching him so much growing up.

When asked if he has any hobbies, Jesse says his "Honey Do List" is his hobby. He once had a motorcycle when he was a bachelor in California, but gave up his Harley days when he married Rosalba, who feared for his safety. Jesse also left behind his days of driving race cars and running quarter miles at the drag strip. In fact, his last speeding ticket was in 1994 in his Ford Mustang. Jesse did say he and his wife like to eat out and they enjoy all types of cuisine as San Antonio boasts some really great eateries. Jesse maintains that San Antonio is best known for their Barbecue. He also has very eclectic taste in music. He listens to Rock and Roll, Tejano, Heavy Metal, Jazz, and R&B. He also learned to play the guitar from his dad many years ago.

Jesse is obviously committed to anything he does, and that doesn’t stop at family. Jesse started with CalArk in July of 2008 and has proven to be a very safe, conscientious, and professional driver. Prior to CalArk, he had retired from the Marine Corps after 22 years. He then worked for Chase Bank as a First Level Manager, with 18 people reporting to him before he obtained his CDL with Swift. Among awards Jesse has received during his tenure with CalArk are 100,000 to 900,000 safe driving miles, 100% On Time Delivery each year, 5 Year Service Award, 10 Year Service Award, 1 Million Miles of Safe Driving, and most recently 1.2 Million Miles of Safe Driving.

Per Leslie Stout, CalArk Safety Director, "Jesse is an all-around good person. He is trustworthy, reliable, and the type of driver any company would be proud to have in their truck. If Jesse is faced with an unforeseen situation, there are no worries about how he will handle it. He is very safe and professional. We are fortunate he chose CalArk." Rebecca Melton, CalArk Operations Manager, echoes this sentiment by saying, "Jesse is an awesome driver and so professional. He has always been so helpful."

When asked what his secret is to staying with one trucking company for so long, Jesse says he genuinely likes CalArk. "I like everyone here: the planners, Dispatch, Safety. Just good people." When asked what advice he would give to new drivers in the industry, Jesse said, "Pay attention and focus. We see it all from up there in our driver seat. There are too many people on cell phones, too many people distracted. You have to drive safely for them, too."

Thank you, Jesse, for all you do and all you’ve done for your country, for your family, and for CalArk. We are excited for the wonderful memories you and your family are about to make, but we will be looking forward to your return to The Wheels of American Business.