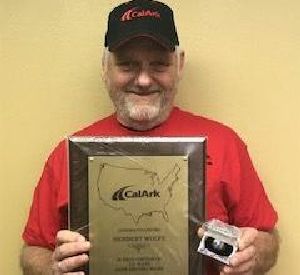 After only 10 years with CalArk, Herbert Wolfe has accumulated a million safe miles and works with Kayla Redd as his dispatcher extraordinaire. Previously a driver for another company since 1990, he's nearing 20 years as a driver, a profession we know takes a lot of mental strength and spatial intelligence.

From London, Kentucky, Herbert has three kids (including his two stepchildren) and six grandkids. When not driving, he likes to watch Duck Dynasty and Criminal Minds, also enjoying going to church with his sisters Georgia, Anna, and Bonnie.

He's earned other awards, such as 100% on-time delivery, a 5-year service award, and safe driving mile awards 100K to 900K before hitting his well-earned million miles last week. His advice for other drivers looking to succeed is to know your limits and take your time.

​We're grateful, here at CalArk, that Herbert has spent his time and energy helping our business and American commerce thrive. Thank you for everything you do!​