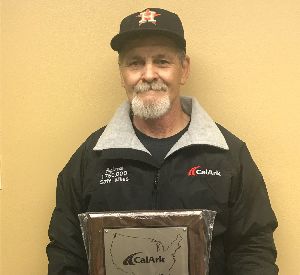 A driver since 1984, Gary Cooper has been with CalArk since 2003. He attributes his success and longevity with one company to his "think with a career attitude" philosophy. He is on Michelle Finn's board but says he has always been taken care of while at CalArk, no matter who his driver manager is.

He's lived his entire life and raised his four kids and soon-to-be-nine grandkids in Waco, Texas. When Gary is not driving, he likes to eat at Golden Corral, relax, and read. Leslie Stout, Director of Safety, says Gary reads so much he can tell you interesting information about any topic you choose. Some of his favorite stories to tell include the time he saw John F. Kennedy in person in 1960 or when he got to see Mickey Mantle play baseball with the Yankees.

Gary also enjoys following his favorite teams: the Houston Astros, the Dallas Cowboys, and the Dallas Mavericks. Gary is proud to have served in the Marine Corp Reserves for 14 years and was promoted to Staff Sergeant in 1988. He says he would go back to the Marines if they called because he would do anything to help his country.

When asked what he would say to drivers entering the industry, Gary replied, "It's best to stay with one company. Play the long game." We are certainly glad Gary chose to stay with CalArk, where we are proud of his service to our country and of his 1.75 million miles. Congratulations and job well done, Gary. Here's to many more!