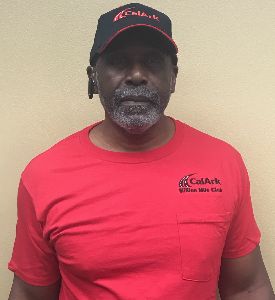 Dwayne Robins started his trucking career in 2005 and has been with CalArk International since 2011.  We are pleased to announce that in January of this year he reached his million miles of safe driving with CalArk.

Prior to driving, Dwayne was a resident manager for an apartment complex. One day he saw an advertisement for a job as a driver and decided to make a career change. He has always wanted to drive and has found that he loves it. He appreciates the way the industry still offers a good, decent living to a man like him. He says he likes CalArk because, “I love the people here, and everyone seems to be in the right spot.”

Over the years other companies have tried to lure Dwayne away from Calark, but he says he doesn’t want to have to re-adjust, and those other companies don’t have the money they are offering. “Why would they be needing drivers if they were paying all that money?” he asks.

Born and raised in Shreveport, LA, Dwayne also lived in San Francisco on and off for 40-45 years. Today he calls Shreveport home once again. He has three children, two sons and one daughter, and he has six grandchildren. Dwayne says he has lived a lot of ups and downs in his life, and his greatest accomplishment is making it “over the hump” where he can enjoy his family and support them if the need arises. When not driving, Dwayne likes to go home and do nothing for the first day. He also likes to go and work on his property he owns in Shreveport. He plans to one day retire and build a house there.

Dwayne says if he had a hobby, it would be exercising and eating properly. In this career he sees the benefits of keeping yourself healthy and well. He does this by keeping dumbbells in his truck and he does push-ups between the bunks. While waiting on loads, he often jumps rope outside. He keeps frozen food in his truck and a pot that he hooks up when he is ready to steam veggies. For breakfast he is sure to eat oatmeal, eggs, bacon, or pancakes so he doesn’t get hungry after he starts his trip. He also drinks a lot of water to stay hydrated. Dwayne says this helps him stay healthy, but also helps his pocketbook stay healthy because, “prices in truck stops are ridiculous. If I don’t have the points, I don’t get it.”

When asked what advice he would give new drivers to the industry and new drivers to CalArk, Dwayne says, “Always remember this is a day-to-day job. If you don’t like to drive and you don’t have stamina, this is not for you. It’s 24 hours a day. Plan your day. I have enjoyed 95% of my time at CalArk. This is the spot.”

We enjoy having you on our team, Dwayne. Thank you for all you do, and congratulations on your 1 Million Miles of Safe Driving!