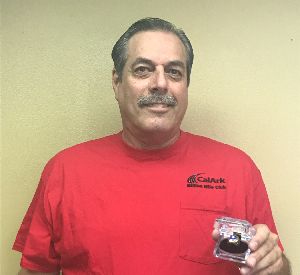 Carl Sparlin has been with CalArk since 2011, and has 20 years of driving experience prior to CalArk in a sand tanker. Carl is from Conway, AR, is on Michelle Finn’s board, has been married to Viktoria for 26 years, and has two sons. When he is not driving, he likes to cook, work on his Kawasaki Vulcan (with which he is obsessed!), do home improvement projects, and watch Blue Bloods.

​He also is a Navy veteran, so ask him to tell you how he got the nickname "Duck." Among other awards Carl has received in his CalArk career are Driver of the Year Runner Up in 2015 and 2017, 100% On-Time Delivery each year, and his 5-Year Service award. Carl represents CalArk each year at the Arkansas Truck Driving Championship and works as a driver trainer for new drivers.

When asked what he would tell new drivers on how to be successful, Carl said, “Never quit, and strive to be the best. That way if you ever come up short, you are still among the best. Shoot for the stars, and if you fall, you will still catch the moon.”

CalArk loves celebrating drivers like Carl who keep the wheels of American business in motion. Thank you for putting in so many miles. We appreciate you!