ATA Driver of the Year 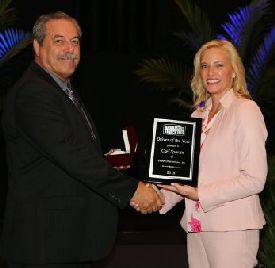 The Arkansas Trucking Association has named Carl Sparlin of Conway, Ark., as the organization’s top truck driver for 2018. Sparlin is a driver for CalArk International, Inc., a carrier headquartered in Little Rock.

The statewide trucking association annually recognizes one driver for their strong and noteworthy professional qualifications, experience and performance.

In nominating Sparlin for this award, Leslie Stout, director of safety at CalArk, noted his 2.6 million miles without a preventable accident during his 23-year driving career. He began driving for CalArk in 2011 and has been recognized as runner up to the company’s Driver of the Year honor several times since then. Sparlin has also received a 100% On-Time Delivery Award each year he’s driven for CalArk.

He has a reputation for leadership as a company trainer for new drivers and provides information on equipment when the company researches for new purchases. Sparlin was involved in pilot programs for outward facing cameras on trucks and new electronic logging device options. Stout said in her nomination, “Carl always has constructive and valuable input to share to make CalArk and its drivers the best, safest, and most innovative in the business.”

Sparlin doesn’t just help his employer with making the roads safer. Last year, the truck parked next to his at a truck stop near Wichita, Kan. caught fire. He was able to offer assistance, clothing, food and comfort until the other driver’s company could arrive to help.

He is a veteran of the U.S. Navy, has also worked with the U.S. Marines and is credited with 52 life-saving resuscitations while working in the medical field.

“In accepting the Driver of the Year Award, Carl gave everyone else credit for his achievement. He credited his dispatchers, other drivers, load planners, shop mechanics, management and safety with his win,” said Stout. “While I agree safety is a team effort, having a skilled and professional driver dedicated to observing rules and regulations because it is the right thing to do is paramount. Yes, it is a team effort, and Carl’s pointing that out is one of the many things that makes him special. He understands it is a team effort. We could not be more proud of his accomplishment.”

Shannon Newton, president of the Arkansas Trucking Association, praised Sparlin for his impressive, professional reputation. “Carl has served our country as a veteran, our communities as a medical professional, and now our industry as a first-class driver. We are proud of his safety record and his distinguished service,” Newton said. “It is our honor to elevate stories like Carl’s and to celebrate his safety record.”

All member companies of the Arkansas Trucking Association are eligible to nominate drivers for this award.