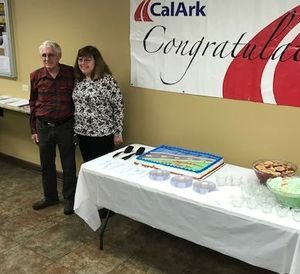 We're always sad to lose a member of the family, and CalArk driver Alexis Pohl and her teammate/husband Liam have long been familiar faces around CalArk headquarters.

Born in Hamburg, West Germany, Alexis moved to Virginia with her family at age 8. She joined the US Navy at 20 and rose to Petty Officer First Class (E-6) during her 12 years of service. She met her husband Liam (who later retired Chief Petty Officer (E-7)) while they were stationed on the USS Emory S. Land.

After earning her CDL and a brief stint with another company, Alexis read about CalArk in a trucking magazine and joined our family in December 1995. Liam has acted as trip planner, navigator, and support team member since 1996.

They've volunteered in the creation of Canadian border crossing procedures and to deliver wreaths for the Wreaths Across America program. She's been featured on the cover of Arkansas Trucking and in the article "The Road Is Calling." She was the 2008 Arkansas Trucking Association Dirver of the Year.

Often referred to as "Our Queen of the Highway" by other Central and CalArk drivers, she's a team member on the CalArk Driver Committee.

She's gotten a 100% on-time delivery award every year since 2003, and a 2.75-million-mile safe miles award in 2016. She's retiring only 85,000 miles short of 3 million miles with us. Through all those met-deadlines and traveled miles, she has ZERO preventable accidents on her record.

We hate to see Alexis and Liam go, but we're grateful for everything they've given to steer the way with CalArk over the decades they've shared with us. All the best to you as you move to the next stage of your lives!